Weapons PTRs-41 increases the likelihood of damage to modules and crew equipment of the enemy by 5%.

At a distance of 100 meters is the anti-tank gun pierced the armor of 50 mm, and at a distance of 300 meters is 40 mm. the Gun had good accuracy. However, the Achilles heel of PTRs-41 was weak zabronevogo the impact of a bullet: it was not enough to get into the tank, you had to hit one of the crew members or serious the host machine. 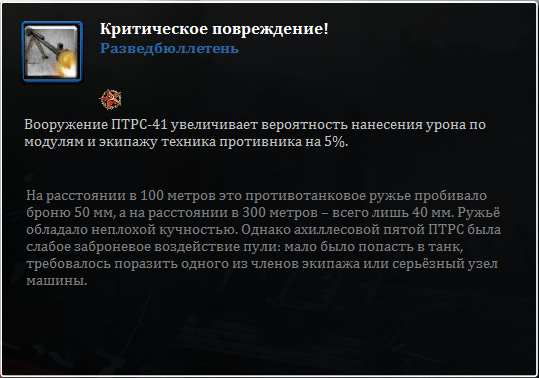 My opinion about the PTRs-41 and Panzershreks.

I know a lot of thought at the expense of the PTRs-41 Panzerschreck.
We know that from Panzershreks not go away! PRTs-41 can easily go away.

I decided to give PTRs-41 Critical damage to the module and crew skills.
To technique the Doge could not leave with ease.