New abilities for a new commander.

I've prepared some abilities for a new commander, new units for the community. I hope they will be useful. 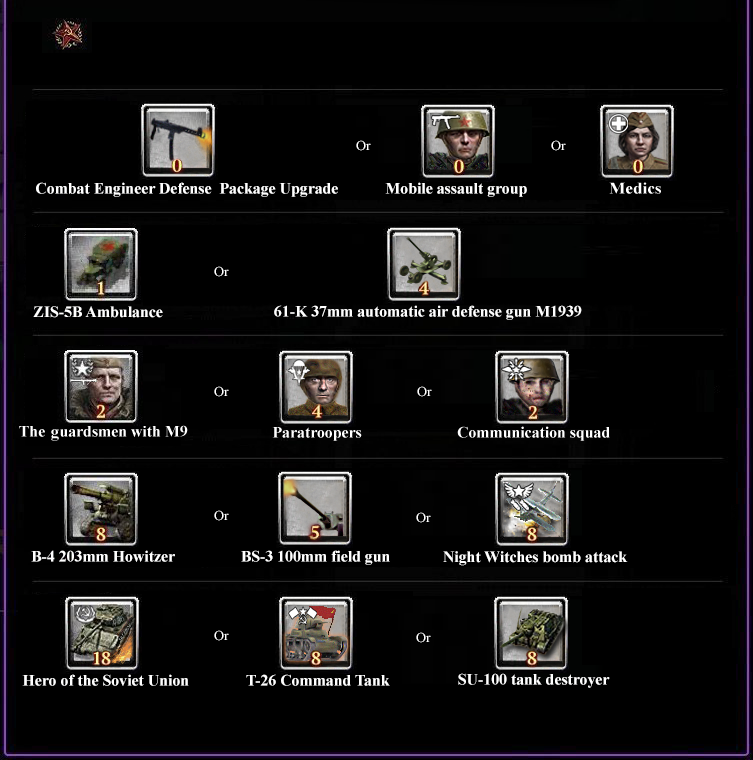 I think that the game for the USSR should be facilitated by introducing new units such as:

This concerns only these abilities, they can be replaced by other. But the Ambulance is needed I believe to make it easier
to heal and replanish infantry of the USSR and the allies. This will change the tactics of the game and allow more efficient use of existing reserves.
But I want to note that this abilitys is only one commander, which I presented above.

I've also prepared some abilities that can be part of a new commander:

This ability also must be only have one commander. But there is a choice, either a Mobile Assault Group or Combat Engineer Defence Package Upgrade. This unit consists of five peoples and has PPS-43 x5 and grenades.
In this case, the Soviet Union will be able to have from the beginning of automatic weapons that can more effectively deal with the enemy. Other units of the Axes are automatic weapons - MP-40 (Wehrmacht) and Kubelwagen, Sturm Pioniere StG-44 (OKW), OKW has upgrade x2 StG-44 for the Folksgrenadery (no commander) and x6 MP-40 and 2 grenades - fragmentation and smoke (one commander).
Have a 1 ability - anti-personnel grenades fragmentation model RGD-33 (25 ammo).

You will be able to bring to the battlefield communication squad, which will be able to conduct reconnaissance from the shelter and to request support.
This unit consists of four peoples and has standard weapons - four Mosin rifles. Can lay explosives, to become invisible in the shelter.
Have a ability:
1) Volley of Katyusha rocket launcher (180 ammo);
2) Call to reserve units (1 conscript squad).
3) Binoculars (10 ammo. Visibility is increased in 2 times, duration - 30 seconds).

Over the battlefield at the specified point will fly 3 aircraft.
The first will clean up the fog of war in this sector, and the other two will produce 2 volleys with missiles and dropped 50kg bombs (each plane - except the first).

This is a new technique that you can call to the battlefield.
This tank destroyer has a more powerful gun than the SU-85, more penetration and more damage (penetration - 260, damage - 200). Abilities are the same as the SU-85.

The M1944 BS-3 stationary heavy anti-tank gun can be built by Combat Engineers.
This gun will have high armor penetration (370) and damage (300). It will be installed on a special area around which will be installed in a circle with sandbags, and the top stretched camouflage net.

This anti-aircraft gun is weaker than the Bofors in damage, but a little faster. Can fire on air targets and ground.
Can be built by Combat Engineers.
Have the ability:
1) To strengthen the position.

Elite infantry, slightly inferior fallshirmjagers in long-range firefights. Armed with submachine guns PPSh-41.
Has 2 uprgade (DP-28 and mine detector (it is possible to clean up behind his back)).
Have a ability:
1) RGD-33 (25 ammo)
2) Plant Demolition Charge (90 ammo)
3) Field Defenses (TM-35 Mine, Razor wire)