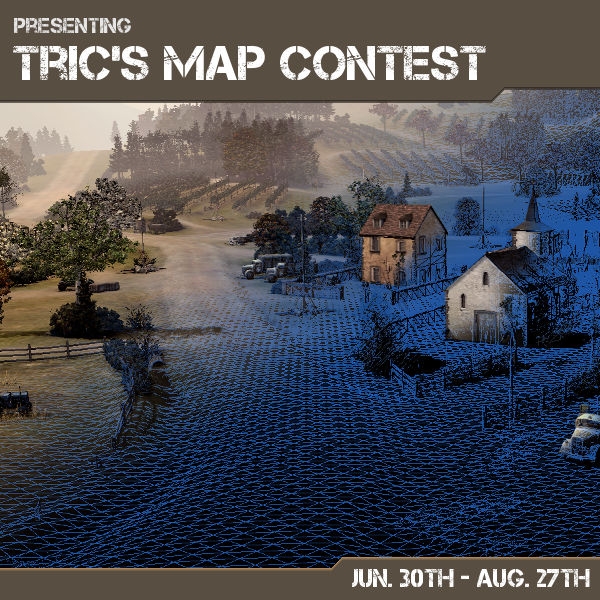 Ever thought about making your own maps and having them be considered by Relic for inclusion in the 1v1 automatch rotation? Well now is your chance to try it out and give it a go! With the community here, we will be seeking to create unique and inspired maps which will bring some love to CoH2.

In the first half of the two part contest, we will be giving contestants a 2 month long period of sharing, feedback and testing. Each person is allowed to submit 1 map for each visual category (Urban, Rural, and Industrial). The maps will be judged based on the following guidelines. Please note that these are merely guidelines, so creativity and non-standard maps will still be viewed and have feedback given accordingly.

The fully monitored forums will be over on Coh2.org and will require account with the site.

Post all of the following information when you register your map(s) in the 2016 Map Making tourney sub-section:

Early September, official date will be announced when we are close to the end date.

Part 2: 1v1 tourney based on the new maps

Details will be provided later, but is penciled in for September or October 2016

Your map will be submitted to Relic for consideration to be integrated into automatch rotation, but we cannot guarantee that they will be added. Relic will be the final arbiter on this aspect.

Details will be provided later, but is penciled in for September/October 2016

After the 1v1 tourney is over and the winner is decided, the players who participated in the tourney will vote on their favorite map and give us the Map Maker winner for the grand prize!

If there are any concerns, questions or something is unclear, please let Tric or one of the other organizers know. We will assist you the best we can. Any answers or solutions we devise will be final.

If you have any tips or feedback, feel free to contact Tric as well.

Remember that we will be exclusively using the Coh2.org forums for submissions and direct feedback, to find the forums head on over to Coh2.org.